I did it! Time heals all wounds, isn’t that right? Last year on this night I was talking to my friend Marcos about being asked to move out of my house and he graciously gave me a key to his place which I didn’t end up needing to use. What a difference a year makes! I’m still here - and if my biggest struggle now is cutting out the portions of yogurt and granola and chocolate nut crunch trail mix, I’d say that’s a marked improvement.

It was hot last year at this time. It was almost as hot as that today. But I didn’t need the big industrial fan all night in the living room, blowing cool air on me as I slept on the couch, with the loud noise drowning out my sorrows.

K and I made amends quickly - as I had already proven I could stop drinking before - time along that path again healed me, and us, back up. Admitting to myself I just couldn’t be that person who could get away with trying to drink socially without crossing the line anymore.

Once again, as before, the voices of resentment that were amplified with the drink went back on mute when I stopped. It was easier physically the second time around as well. It took a few months to work through the psychological withdrawal. I’m to the point now where the little voices inside myself are saying “Why would you take that first drink? It just leads to more suffering.” Physically, by this time last year I was losing my appetite - and my bodily functions were showing the tell tale signs of liver stress.

Once I quit again, my appetite came back with a vengeance - and it is this I now need to pivot to for year two. I’d read Recovery 2.0 once before. I’ve kept it near my bedside table to pick back up again. I also keep a copy of Recovery Dharma handy as well - for some informal self meditation guidance, though I don’t really meditate in the traditional sense, or on any kind of regular basis.

The covid crisis has helped me in my recovery - fewer temptations socially, that’s for sure. But I’m also feeling like I can cope with it better because I’d already become accustomed to one day at a time. And now everyone else had to get a feeling of what that’s like - to shelter in place. I’ve been sheltered in place, in a sense, for a year now. Since August 13, 2019, and once before for about seven months, from March 11th to September 29th, 2018. Now that I think of it - these next five or six weeks are ones I’ve been sober for three years in a row. I’d have been well on my way towards year three of sobriety in a row by now without the ten month of joyless drinking I went back to in between. As I’ve said before: drinking...it was fun. Until it wasn’t.

Allie and Mason dropped me a sand dollar in the mail last week, which arrived just this evening. I guess the USPS really is slowing down. But the timing of its arrival was perfect, right on the dot. It says “1 year.” I’ll see if I can’t embed a picture on here, and bid you all a good night. 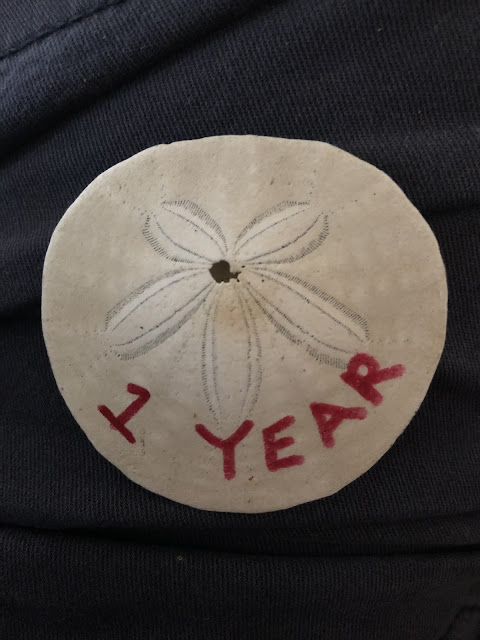 - August 14, 2020
Email ThisBlogThis!Share to TwitterShare to FacebookShare to Pinterest

One thing we can now be certain of - any issues you may have with my communication, or just anything to do with me really - are not the resu...