In my darker moments these past few days, all I can think of is a sense of relief on behalf of my dad for being rid of the burden of being in this world. Lately it feels like we’re all just stuck on an assembly line in this factory of bullshit. There’s just so - much - bullshit…I can’t even. I mean, of course we soldier on. But for what purpose, I sometimes wonder? To sell more shit so somebody somewhere gets to hoard more money. Meh. The American Dream (and really, the world) is just aligned with complete bullshit. We can carve out our moments of grace and beauty despite all of that. And that’s about it really.

- September 14, 2021 No comments:
Email ThisBlogThis!Share to TwitterShare to FacebookShare to Pinterest 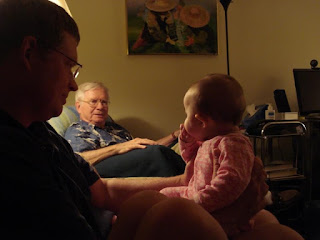 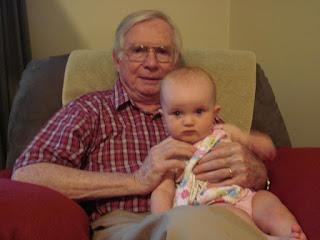 My dad, Robert Swan, passed away peacefully yesterday morning. He was 94 years old. Or, to be more precise, 34,399 rotations of the earth.

He was born in Berlin, WI (same as me) one month after Charles "Lucky Lindy" Lindbergh flew solo across the Atlantic in 1927. Calvin Coolidge was President. The Great Depression was over 2 years away.

He graduated valedictorian for his class in 1945, then enlisted in the Navy during WWII, serving out his time at Great Lakes Naval Academy once the war was over. Attended game 7 of the 1945 World Series (for all of you Cub fans out there).

Went to UW Madison (same as me), graduating in 1950. He started into Law school but decided to join my Grandpa Barney in the fur business, which our town was known for back in those days. That business eventually led him to the Chicago area, where we moved in 1985 days before I started my sophomore year in High School. He retired in 1994, then moved back to Wisconsin, settling in the house in Oshkosh that I am now typing this from in 1995. He lived out the rest of his years here, including a post-retirement career at 4Imprint, where he worked until he was 90 years old.

Dad was just one of those people who didn't let things bother him too much, was always gentle and kind, and forgiving -- and I think I only heard him curse once (and it was in "french" - when in Paris, he once said "watch out for the merde du chien"). I guess you could say he was a true gentleman.

Although, at 94, one can expect the end to be near - it still hurts to lose such a positive influence. He just had this way of making you feel like everything was okay. When I found out in the spring of '85, a HS freshman at Berlin High, in the only place I ever knew, that we would be moving to the Chicago area - I came out of the conversation not scared or sad, but hopeful for the future thanks to the gentle way he told me how our move wouldn't be an upheaval, but a great opportunity. And in hindsight, it was.

This, and so many more stories I can share given time. I'll leave it with these personal anecdotes for now, and follow up later with some more pictures and stories, perhaps.

Services will be on September 7th, visitation at 9:30 and Mass at 11 at Most Blessed Sacrament Catholic Church (St. Mary Site 605 Merritt Ave) in Oshkosh, WI, for those who can make it.

That's all for now. Love to you all. Be sure to hold your loved ones close and to tell them you love them early and often. Take care!

- August 27, 2021 No comments:
Email ThisBlogThis!Share to TwitterShare to FacebookShare to Pinterest

A photo or two

I said I’d post photographic evidence of the treasure island bike trip on the social webs the other day, and I did. I’ll share a couple of them here as well. By the way, we weren’t supposed to bike from the bay bridge through to treasure island because of the construction. But we didn’t really see that loud and clear until all of the signs posted as we were headed back off the island. We stumbled onto three doggie diner dogs on a flatbed trailer, and some pretty excellent views of SF. Enjoy! 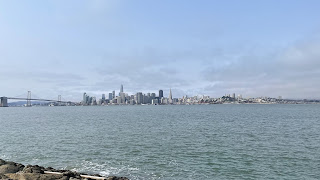 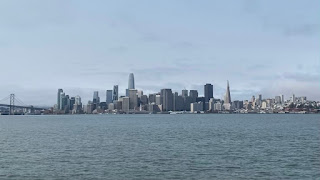 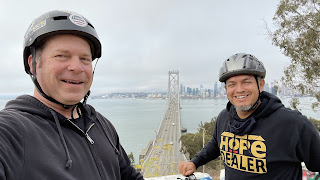 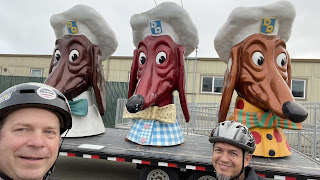 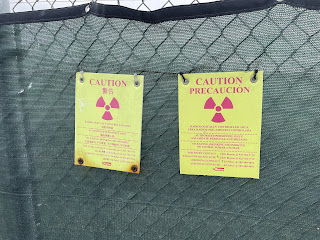 - August 17, 2021 No comments:
Email ThisBlogThis!Share to TwitterShare to FacebookShare to Pinterest

I’m a couple of days late in posting this, but on Aug. 13th I’ve been sober for 2 years. Reaching year 1 had a bit more fanfare, because it was the sign that I could do this. No holiday was strong enough to knock me off the wagon, no sir! And we were in the middle of the pandemic. We still are, to be clear, but not in the middle of a complete lockdown.

Anyway, this year has been “stay the course,” and it hasn’t felt like an uphill battle, more like biking on a plateau. But as Robin Williams has said about addiction - “it waits.” I am known to draw seemingly incongruous analogies, but that’s what comes to mind when I see the Taliban toppling all the cities and towns that the US led forces took control of 20 years ago, to find and get Bin Laden, who ended up in Pakistan, our supposed “ally.” Anyway, addiction is like the Taliban - all it has to do is sit and wait (like “Islands in the desert,” but that reference is for another time).

Fighting off addiction doesn’t seem like it’s going to take a trillion dollars of effort, because my brain and my body have already told me that it feels better, and “more of this, please.” Especially the brain - the mental health part. I’m not prone to argue over bullshit, or to listen to every little voice of resentment in my head. Those little bullhorns are still there, ready to be picked up the moment I decide to have a lapse. But I don’t think that’s going to happen any time soon. One day at a time everyone! Thanks for all of the love and support!

Going on a bike ride to Treasure Island and back from home, with my pal, Marcos. There will be photographic evidence on the social webs. Peace.

- August 15, 2021 No comments:
Email ThisBlogThis!Share to TwitterShare to FacebookShare to Pinterest

One thing we can now be certain of - any issues you may have with my communication, or just anything to do with me really - are not the result of my drinking. If there are still issues - it’s gotta be something else, right?

- May 24, 2021 No comments:
Email ThisBlogThis!Share to TwitterShare to FacebookShare to Pinterest

I stopped drinking. HA - I had written a bunch of other stuff that I wisely saved as a draft, except that none of it saved except for the first sentence. The tech gods sent me a message, and the message was received. So this is the post I will publish. The rest is left unsaid.

- May 20, 2021 No comments:
Email ThisBlogThis!Share to TwitterShare to FacebookShare to Pinterest

If FB decides to reinstate the account of the former "president" tomorrow, I expect an uptick of activity here for random updates and the like, doin' it old school here and via twitter. Jury is out on instagram. Probably not much there since FB owns them also. I do not want to continue to do business with anything or anyone that/who aids and abets known fascists. FB is already on thin ice anyway. I've contemplated stepping away from that platform for some time for a variety of other reasons, not exclusive to Zuckerberg being a complete d-bag and Sheryl Sandberg just generally bugging the fuck out of me with her lean-in bullshit. Google and other platforms are not without guilt as well. We do live in the modern world and have to live in that world and communicate as best we can (when in Rome, etc.). But a line needs to be drawn and if 45 is back to feeding the news cycle again with his bs, I'll be here for a bit.

- May 04, 2021 No comments:
Email ThisBlogThis!Share to TwitterShare to FacebookShare to Pinterest
Older Posts Home
Subscribe to: Posts (Atom)

In my darker moments these past few days, all I can think of is a sense of relief on behalf of my dad for being rid of the burden of being i...