On to other subjects. How about that Cinderella Bloodbath (patent pending) over the weekend in the NFL? The Cardinals?! Really. And the Ravens? Hmmm. Who'd have thunk it. Well, I hate the Baltimore Ravens, but could the coming Super Bowl matchup play out like this T-Shirt? 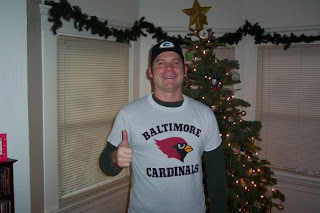 On one of the Beulah tours, forget which one, we played a show in D.C. and some kid wearing this T-Shirt managed to make it backstage and have a beer, so my foggy recollection of the story goes. "That's a cool T-Shirt," someone in the band (forget who, but it wasn't me) said. Apparently when the Cards were set on moving from St. Louis to...anywhere but there...someone in Baltimore pumped out a few "Baltimore Cardinals" tees. Somehow the kid ended up asking me if I wanted the shirt, that we could trade. So we did. He ended up with a Jeremy Enigk (Sunny Day Real Estate) "Return of the Frog Queen" shirt so I think I got the better of the bargain.

This picture of me wearing it was taken (at my insistence) during the holidays of 2004 when, thanks to the last minute heroics of the Arizona Cardinals in beating the hated Vikings, the Pack squeaked into the playoffs. It (the picture, that is) was sent to Steve St. Cin, a long suffering Cards fan who had only witnessed his team make it to the playoffs once in his life (1974, age nine).
- January 12, 2009 1 comment:
Email ThisBlogThis!Share to TwitterShare to FacebookShare to Pinterest
Newer Posts Older Posts Home
Subscribe to: Posts (Atom)

One thing we can now be certain of - any issues you may have with my communication, or just anything to do with me really - are not the resu...