About my last two posts: God what boring posts! Must be middle aged senility starting to kick in. I'm sitting in my office on a Friday afternoon and much of the crew around me are employed in shooting each other with nerf rockets. It's that kind of a day. This is usually about the time the alcohol cart comes swinging around, bottles and glasses clinking together. My friend and colleague, Mark and I have created a little vernacular around this. One Friday around 2pm or so I said I was ready for the clink. Later a signal was borne out of this with a slight nod to Hogan's Heroes: When one of us is ready for a drink, we now just call out "Shultz." Clink = (Col) Klink ergo Shultz. At the old gig it was "Yar," the signal that it was time to go to the pirate (Il Pirata). But when you work for a company that regularly stocks its fridges with alcohol, we haven't bothered to find a pirate in our new surroundings. Also, what's a "pirate" emoticon? For now I've been settled on just a semicolon: ;- but someone with a better brain might help. 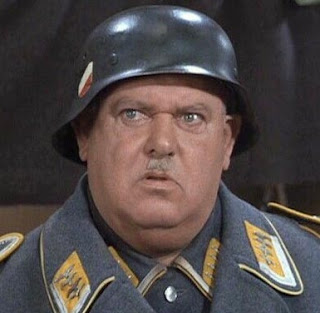 - September 13, 2013
Email ThisBlogThis!Share to TwitterShare to FacebookShare to Pinterest

If FB decides to reinstate the account of the former "president" tomorrow, I expect an uptick of activity here for random updates ...