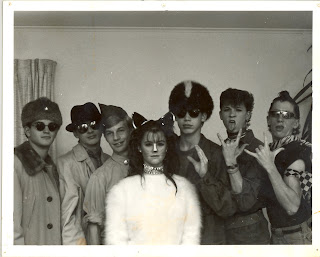 The hat I'm wearing is, in fact, real skunk fur. I'll have to fact check with my dad for the story, but it was a Truesdell Furs creation, back when he was a relative youngster. Guessing it was a prank. The only link I could find online about Truesdell's, which at one time was run by my grandpa and later, my dad, was a realtor site indicating the old building has been sold. About halfway down the page.

At any rate, the crew in this picture - this being Villa Park, Illinois, which is where we moved to after we left Berlin when Dad took a new job at York Furrier in Elmhurst, later stopped by Baker's Square, and I bunched up the hat and cradled it in my arms "just so," to see if I could freak anyone out. The person at the front desk, speaking slowly as if concerned said "Um, that's...got to go."

UPDATE: Another link to the Truesdell building.
- June 16, 2009
Email ThisBlogThis!Share to TwitterShare to FacebookShare to Pinterest

If FB decides to reinstate the account of the former "president" tomorrow, I expect an uptick of activity here for random updates ...