The walk is tonight. Wish us luck!
- July 22, 2006 No comments:
Email ThisBlogThis!Share to TwitterShare to FacebookShare to Pinterest

This article is the best articulation of what I've been feeling about the mess in the Middle East. I do not agree with the solution, but I think it draws an interesting parallel between Nasser and Ahmaninejad, which I think is essentially correct. I think, like Nasser (from my reading of him back in my college days when I had to write a paper on the Aswan Dam for a course on the Middle East...packed that year due to the first Gulf War, I might add), Ahmaninejad has designs of conquest. I think the notion of a "crescent" of Shiite persuasion is very real, and what the Bush administration (and the douchebags in the PNAC) doesn't seem to understand, or want to admit, is that by throwing all of our cards onto the table in Iraq, cards that have turned out to be a very bad hand, the likes of Ahmaninejad are now emboldened because they know we're probably not going to send troops over there. And Kim Jong-Il is playing the role of a Sideshow Bob quite predictably. The only thing missing here is the Cold War backdrop.
- July 20, 2006 No comments:
Email ThisBlogThis!Share to TwitterShare to FacebookShare to Pinterest

Supporting my question about why we're approaching Iran and NK differently than we did for Iraq is this article in today's NY Times. An interesting read, whether you agree with its premise or not.
- July 10, 2006 No comments:
Email ThisBlogThis!Share to TwitterShare to FacebookShare to Pinterest 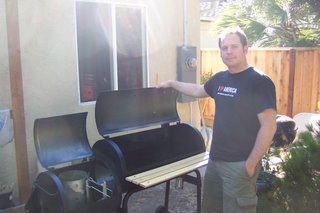 After all of the geek tech talk, I forgot to mention the most important part. To celebrate our anniversary and getting our apartment in order the way we like it, we're hosting a BBQ today. This is what I got for our 5 year anniversary: A CharBroil Silver Smoker. I see many years of happy memories with this bad boy in the middle of 'em.
- July 09, 2006 No comments:
Email ThisBlogThis!Share to TwitterShare to FacebookShare to Pinterest
7/7 has a different meaning in our household: It's our wedding anniversary. I got K an iPod Nano the other day, but things didn't go as planned in the setup. When I plugged it into either of the front USB ports in our Gateway PC, I kept getting the message:

"USB device not rcognized. One of the USB devices attached to this computer has malfunctioned and Windows does not recognize it. For assistance in solving this problem, click this message."

Clicking this message didn't do it. So what did I do? First, I went to iTunes and upgraded to the latest version. Then I ran the iPod disk with the Nano. Repeated the above. Same result.

Next, I plugged in my iPod and got the same message. Uh-oh, what did I do? So then I did a Windows System Restore, and restored the computer to a state before I started all of this.

Bad move. Now iTunes wouldn't open and neither would Quicktime. In the case of iTunes, I would get the Windows Error "Send Error Report." Tried deinstalling using the Windows Msi cleanup tool, went to regedit, tried to clean the registry. This made matters worse. I went to bed angry.

Yesterday morning, at 6:30 am, I woke up and couldn't take it anymore. I did ANOTHER system restore, this time back to 7/5. Still no dice. Now I would get "-1639 Invalid Command line argument. Consult the Windows installer SDK for detailed command line help."

Finally, I re-ran the msi cleanup, removed all folders relating to iTunes and iPod (after backing them up). I also managed to find a tech note to fix Quicktime in a forum from another user. I downloaded and ran Quicktime as a standalone application, upon that user's advice. Then I re-downloaded the latest and greatest of iTunes. Got those back up and running. Next, I re-ran the installation disk for iPod Nano.

I then finally went back and followed Apple's "5 Rs" advice. I restarted the Nano, then rebooted the PC. Then, I plugged the Nano into one of the USB ports in the back. That worked. In the front? Still "USB Device Not Recognized." Hmmm, a problem with the USBs in the front? No, the Webcam worked, as did some other programs. Interestingly, a USB disk drive that Greg lent so I could download "Sunday Bloody Sunday" for K also threw out that same error message.

So, I dug into a Windows forum (which I now cannot find) and found a little article: It seems that the Windows Genuine Advantage patch KB 905474, installed on my machine on 6/30, seems to be the culprit. Could I remove it from "add-remove" programs in the Control Panel. Nope. Of all of the applications/patches in add-remove, this one entry is curiously the only one that cannot be removed. It even says so in the tech note. What gives?

I then connected my iPod in the back, and Apple came up and said there is an updated software version for my iPod, would I like to download it? Yes sir, I would. I did, and then MY iPod started working in the front USB. But the Nano still doesn't. An improvement, but an annoyance. Still, I got K's to work, downloaded all the Tunes, and had it at her bedside table by 9am as she was waking up.

Lessons learned? Dumb it down. Use the KISS principle. Had I kept it simple, stupid, I probably would have solved the problem by running the Nano install disk and then just trying to plug the Nano in one of the USB ports in the back of the machine. And I would have saved about 5 hours of troubleshooting hell. I came THIS close to copying all of my MP3s and M4a (iTunes files) to disks and transferring them to my G4 and saying to hell with the PC. But the takeaway from this is: Never give up. As K was rocking out to "Sunday Bloody Sunday" with her new iPod Nano, I blew her a kiss and mouthed just that. Never-Give-Up.
- July 09, 2006 No comments:
Email ThisBlogThis!Share to TwitterShare to FacebookShare to Pinterest

I wonder if the White House will try CNN in the "court of public opinion" for revealing that this CIA unit has been shut down. Or maybe they leaked that one on purpose. Who knows? Gotta keep 'em guessing, right?

Speaking of a lack of consistency, no one on the right has been, thus far, able to explain why we've been so measured in our responses to North Korea and Iran's bellicosity as compared to our, um, sense of urgency in the months leading up to Iraq. Am I missing something here?
- July 05, 2006 No comments:
Email ThisBlogThis!Share to TwitterShare to FacebookShare to Pinterest
Newer Posts Older Posts Home
Subscribe to: Posts (Atom)

I woke up a little earlier this morning, from a dream I guess, hearing an old song of mine in my head called SOS (Symphony of Silence). My f...